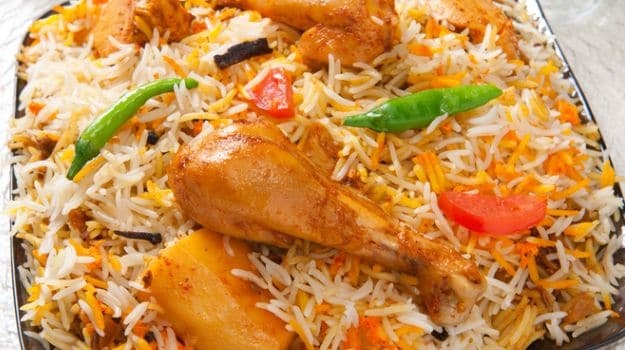 Biryani is a celebratory Indian food that is a wonderful concoction of mesmerizing aromas, vivid colours, fluffy rice, and compelling curry flavours. Biryani is considered as the most flavoursome royal delicacies that were introduced to the North Indians by the Mughals and to the South Indians by the Arabs.

The Chicken and Mutton Biryani recipe initially thrived in the popular Muslim cities like Hyderabad, Delhi, and Lucknow, after which it earned nationwide fame. The Biryani cooking style in North India differed from the Southern States.

Here are the Three Different Biryani varieties that have shot to fame because of its exclusivity and taste.

Pro Tip to Get your Hyderabadi Chicken Biryani Perfect:

Preparing Hyderabadi Chicken Biryani at home is quite simple and easy. This is appreciated for being the easiest Biryani recipe as the meat or spices do need any sautéing. It only requires the meat to be marinated with the other ingredients and spices and layering of the half-cooked basmati rice over it. Try cooking the Biryani on a slow dum process, and allow the steam to be trapped, to retain the smell.

A Biryani recipe cooked and prepared in an authentic royal style, the Awadhi mutton Biryani recipe is brought out from the royal kitchens of Awadhi. Derived from the Persian term ‘biryan’, the Awadhi mutton Biryani is said to have originated in India back in the Mughal Period and continues to dominate our taste buds. The Mutton pieces are slowly cooked to extreme perfection amid aromatic rice. The marinated succulent Mutton is slow-cooked in a delicious melange of herbs and spices to create a tasty Awadhi Biryani.

To cook the best Awadhi Mutton Biryani, you need patience and a thorough understanding of the Biryani spices, followed by the minuscule details of the process involved. This recipe cannot be whipped up in a hurry and calls for patience and time. Both the meat and rice must blend seamlessly into one another. While you must ensure that the meat absorbs the sweet-smelling rice, the rice must carry the aroma of the meat.

Handi Biryani is a slow-cooked delectable chicken biryani recipe that brims with the aromatic flavours and is layered with vegetables, chicken, milk, and spices. The rice of Handi Biryani is cooked with vegetable layers on low flame along with a plethora of spices and chicken. Slow-cooked in a Handi (around traditional pot like a vessel, with its neck narrower than its base) this lip-smacking Biryani recipe is sure to leave everybody wanting for more at the table.

These Biryani varieties are the easiest to cook and requires minimum ingredients that are available at home. Try these recipes today and you can always thank us later!

Why are most people started to take alcohol for relaxation?

The various types of steak and how it is cooked?

Grilling steak for the summer: The love for great food!

How Long Is Pizza Delivery On Average?